The commoditization of technology, and when to open the source

The point of open source is not to kill competition, it's to enable innovation at a higher level

I have exclusively used Free (as in freedom) and open source technologies for more than 15 years, and have contributed to a number of open source projects. However, virtually every person in the developed world now uses open source technologies every single day, usually without usually even knowing it. We carry open source cellphone software in our pocket if we use Android, we use open source browser technology if we browse the Web with Chrome or Firefox, and at the very least, we request pages from open source webservers running on top of open source operating systems when we view the majority of pages on the Web.

On face value, it seems counter-intuitive that a company could survive if they were to open source their products or technologies, since if the product is available for free in source form, competitors could take these products or technologies and use them to compete without doing their own development work, and/or sell the originating company's products themselves. Consumers could obtain and use products for free without purchasing them, by building the products themselves from source or by using versions built and shared by other consumers.

However, at least from an economics perspective, the point of open source is not to kill competition, it's to enable competition and innovation to take place at a higher level of abstraction than was previously possible.

In the early days of space exploration, you couldn’t just buy an off-the-shelf rocket engine; only governments with multi-billion dollar budgets could design and build rockets that could put an object into orbit, much less a man on the moon. However in 2004 a private company, Scaled Composites, won the $10M Ansari X-Prize for putting a civilian in space twice within a two-week period. The US government has subsequently awarded multiple heavy-launch contracts to another private company, Elon Musk's SpaceX, to replace its own aging heavy lift technologies, and recently canceled its own costly Constellation program that was intended to replace the shuttle. The US Government is still debating what technology should replace the shuttle and its launch system, but it is becoming increasingly clear that we have reached an era where the US Government is no longer able to compete with commercial offerings. This is a complete inversion of the situation in the early days of the space race, when there was no way the private sector could afford to compete with the financial resources that the government was able to throw at open-ended space research.

Commoditization is an inevitable process for all technology

Every industry goes through this transition towards the commoditization of technology, which is the stage at which a technology is commercially available in off-the-shelf form, and/or when the knowledge or parts required to build the technology are freely available and anybody with sufficient skill in the art can build it if they expend sufficient effort. When a technology has become commoditized, it becomes the newest "greatest common denominator" for the industry.

The process of commoditization has already happened in the PC hardware space (with the development of generic PCs that took the bottom out of the mainframe and minicomputer markets and made computers accessible to all), it has long been happening in the operating system space (with Linux and BSD), it continues to happen in the web technologies space (with browsers, web servers, web toolkits, the evolution of browser extensions into web standards, etc.), and is currently happening at an alarming rate in the mobile space (with Android in particular).  There are many examples of this in every industry.

Price is usually the first thing to go, then a little later it becomes clear that technologies that are free but closed-source, and the communities they serve, stand to benefit substantially from opening the source.

Commoditization of technology enables innovation at a higher level

The interesting thing about the commoditization of technology is that it affords all players a new solid foundation of common-denominator technology to build upon, and innovation can then move up to the next level of abstraction. Nobody builds their own web server anymore -- it doesn’t make sense to reinvent that wheel when there are several incredibly powerful, commoditized open source options; everybody just uses (and innovates on top of) Apache/Cherokee etc. In the mobile space, the availability and commoditization of remarkably rich app development platforms such as Android has led to a Cambrian explosion of diversity in mobile applications that was simply not possible before powerful and featureful mobile operating systems became a commodity on the majority of cellphones.

Most companies are very familiar with the maxim, "innovate or perish."  However, many companies also fear that the commoditization of technology, combined with the open sourcing of commoditized technology, is a recipe for destroying business models and even entire industries. It is understandable that this would be a big concern for many industries, especially if their market is small. However, some companies divert too much energy towards holding onto the IP they already have, doing whatever they can to resist forces that would lead to the commoditization of those technologies. Progress in that market ends up becoming enmired. Ironically, this allows the company to continue to operate within its comfort zone -- but it is not a sustainable model and is certainly not a growth model.

There is nothing ad hoc about when companies go through the different stages of innovating, resisting innovation, and then perishing -- in fact, it turns out that these stages are completely predictable. Geoffrey West of the Santa Fe Institute describes this process briefly but eloquently in his recent TED Talk:

Companies typically produce their best innovations in their "prime years", before their growth slows. In their later years, they become bogged down by the very bureaucracy that granted the company economies of scale in its "young adult years". Old companies have so much corporate inertia and bureaucracy that they cease to innovate and collapse under their own weight. Restated, it is in the early years of a company's life that they are able to produce technologies that have the potential to become commodities. In their older years, companies often fight commoditization (i.e. cease to innovate) and eventually lose that battle.

Today, commodity technology inevitably ends up open sourced or ceases to be relevant. It doesn't take a huge jump in logic to realize that if you fight open source, you are in a real sense fighting innovation, and it's a good sign that you have entered the life stage of corporate senescence. Old companies typically try to stifle the innovativeness of their competitors through patent litigation, rather than moving up a level and innovating on top of the new common, commoditized platform (which is doubly ironic, because patents are supposed to encourage innovation rather than stifle it). Such companies lack creativity, skill, nimbleness and innovativeness of their own, and will soon die.

It is worth noting that even though biological organisms and companies all follow the same growth curve, the lifespan of organisms and of companies depends upon their size. Thus, even though death is inevitable, it would make sense that corporate lifespan can be increased by doing whatever is possible to ensure that a company is better able to scale.

How to know when a technology has become commoditized

It's usually clear when a technology has become a commodity. One or more of the following scenarios will hold true: 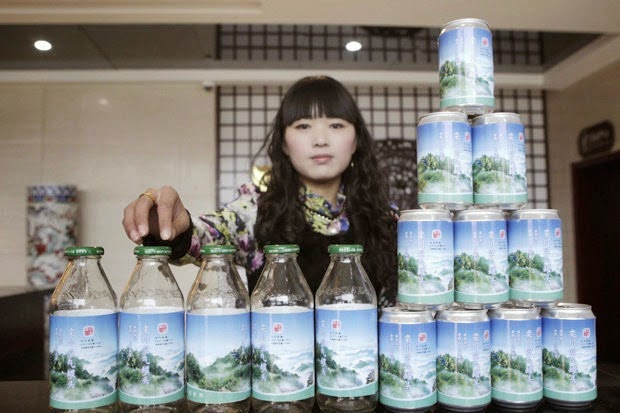 Bottled and canned air, for sale in China for
up to $860 for a jar of air from the French countryside

It makes a lot of sense for everybody to use and contribute to a common shared source code base once a technology has become commoditized. The right way to look at this is not "we're making our competitor's life easier", but rather, "we're making the world a better place for everybody, and enabling a whole new generation of innovative products that can be built upon this platform".  There's almost always plenty of room up there at the next level for everybody.

There is a lot of discussion about when or even whether a technology should be open sourced. Open source business models typically revolve around expertise for hire (e.g. support contracts) or value-added repackaging of open source products. However several points should be noted:
Companies need to learn to respond to the commoditization or open sourcing by competitors of technologies in areas they are seeking to remain competitive, and should not continue to try hard to sell something that is not clearly better than an open or free alternative. For example, the operating system space was commoditized over a decade ago, but Microsoft is still deriving a large percentage of their income from of sales of Windows as a base operating system, even though profit margins are quickly eroding as computing moves online and people use a plethora of devices running open source operating systems to access the Web.

Related reminder: If you're not cannibalizing your own business model from below with the next big thing, then somebody else is. (See how Amazon cannibalized their own book sales with the Kindle for a good example of how to approach an eroding business model.)

A nonexhaustive list of situations when opening the source of a product may be helpful: